Super Mario Bros.is a sidescrolling action game. Many consider it to be the greatest video game of all time.

The plot is that Bowser has taken Princess Toadstool, and that Mario has to rescue her from his lair by battling against Bowser's minions that he has sent out to prevent Mario from reaching the Princess. The game has coins scattered all over the world, and there are also ? blocks, bricks which may contain powerups, coins, or 1-Up mushrooms in the block. If the player grabs 100 coins, he can also get a 1-Up. The player can also play as Luigi in the 2nd player mode after Mario dies. The game starts with 3 lives, 0 coins and it also starts the player off as a small Mario. Mario can die if he gets hit by an enemy while staying small, falling into an endless pit, or if the player runs out of time. There are different effects when stomping an enemy, like if Mario stomps on a Goomba it will die instantly. The world contains 32 stages, and in the -4 levels, except on 8-4, there are decoys of Bowser that Mario can kill, and after he defeats them, a Mushroom Retainer will be waiting at the end saying "Thank you Mario, but our princess is in another castle!" Some stages are underwater and in the underworld as well. In the underworld levels, there are 3 warp zones hidden. If the player manages to beat the game in World 8-4, they will find Princess Toadstool at the end, and she will congratulate the player for saving her and that there is a "second quest". 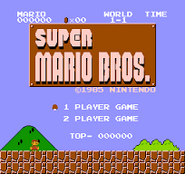